Vibration is a mechanical phenomenon whereby oscillations occur about an equilibrium point.

In the world of pumps and rotating equipment vibration undesirable, wasting energy and creating unwanted sound. For example, the vibrational motions of engines, electric motors, or any mechanical device in operation are typically unwanted. Such vibrations could be caused by imbalances in the rotating parts, uneven friction, or the meshing of gear teeth. Careful designs usually minimize unwanted vibrations.

The forces generated due to the resonance of vibration can be very large and can be illustated in the video on the left. These forces will undermine your equipment and can/will cause serious accidents and damage.

Sensor systems can detect a range of common problems, including the following:

Alignment problems can cause significant wear and tear on a unit. Once a rotor is misaligned, it generates a radial force that is transferred to the rotor assembly, in many cases causing the misalignment to grow worse over time.

Left uncorrected, vibrations and temperature excursion caused by misalignment can lead to other issues, like failing seals, couplings, and bearings. Fortunately, shaft vibration analysis can usually identify this problem before system failure.

A loss of balance is a common problem in machines used in materials processing. When mass is not consistently distributed throughout the rotating mechanism, the point of greatest mass will vibrate. A sensor array used for machine vibration analysis can quickly detect the distinct, sinusoidal waveform of an unbalanced rotor’s vibration.

Rotating equipment should occasionally be visually inspected for parts that have become loose during operation. If a mounting bolt is loose, equipment can sometimes shift, causing low frequency vibrations.

Loose parts inside the rotor assembly can cause significantly worse problems, potentially creating imbalances or causing bearings to seize. Loose internal parts can cause a variety of vibrations and premature wear depending on their location and their interaction with other components. While vibration analysis methods will signal a problem in this case, it’s up to you to complete a visual inspection and resolve the root cause.

Many rotating equipment systems include the movement of fluids. If equipment is not precisely aligned and calibrated, internal fluids can cause specific types of vibrations. Such vibrations may be inconsistent and typically occur at an irregular frequency relative to rotor speed. Analyzing a system containing fluids requires careful consideration of the system’s components—seals, pumps, and compressors—that can affect fluid dynamics.

Bearings and other moving parts occasionally need to be replaced. From time to time, a part will begin to fail before its expected replacement date. Rotating machinery vibration analysis can detect the early degradation of parts as they introduce slip, friction or imbalances in a system. 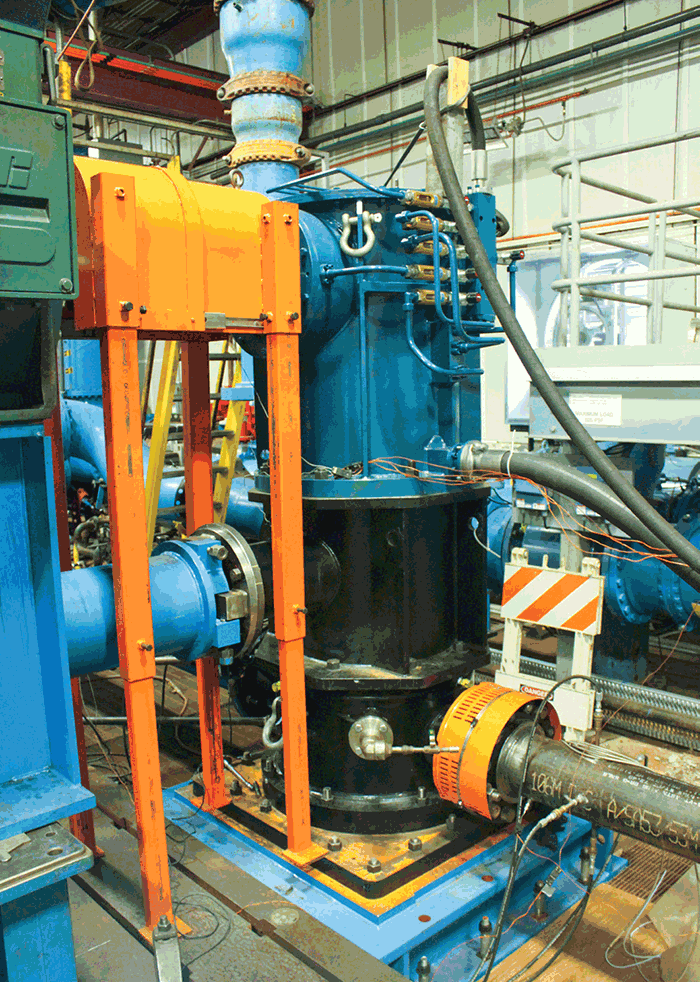 Centrifugal pumps are among the more versatile and widely used pieces of rotating mechanical
equipment found today. Pumps are essential in almost all utilities services and power generation
plants. It is estimated that pumps consume approximately 31% of rotating equipment electrical
power used throughout industry. Pumps are a vital part of our lives on the planet today.

The basic principal of operation for a centrifugal pump is that a shaft mounted rotating impeller
inside a housing (volute) imparts energy to the fluid being moved. Centrifugal pumps utilize
centrifugal force (thus their name) to increase the velocity of the fluid as it passes through the
impeller and exits at the tip or periphery of the impeller. This action converts mechanical energy
(shaft torque) into kinetic energy by acceleration of the fluid to a higher velocity and pressure
(potential energy).

PUMP PERFORMANCE:
Pumps follow basic laws of performance. These are useful in determining the effect of changes to the operating parameters and can help determine the cause of operational problems. These basic laws apply to most centrifugal pumps or pump systems.

DETECTING PUMP PROBLEMS USING VIBRATION ANALYSIS:
Centrifugal pumps are subjected to operational forces generated by their operating speed, system head, pressure and piping arrangement. These operational forces cause forced vibration and may
originate from the rotating parts or operating conditions (flow quantity, pressures, speed and arrangement). This vibration reduces the expected life of the pump bearings and other components.

1. Cavitation:
Cavitation typically generates random, higher frequency broadband energy, which is sometimes superimposed with blade pass frequency harmonics (multiples). Cavitation is a symptom of insufficient net positive suction head (NPSH). Cavitation results when the absolute pressure of the liquid at the pump impeller inlet approaches the vapor pressure of the liquid causing vapor pockets to form and collapse (implode) as they pass through the pump impeller. The collapsing of the vapor bubbles can be very destructive and may damage the pump and impeller. When present, cavitation often sounds as if “marbles” or “gravel” are passing through the pump. The positive suction head required to correct suction cavitation is known as “NPSHR” (Net Positive Suction Head Required). This value is typically supplied by the pump manufacturer.

2. Pump Flow Pulsation:
Pump flow pulsation is a condition that develops when a pump is operating near its shut-off head. The vibration in the time waveform will be sinusoidal. In addition, the spectra will still be dominated by 1X RPM and blade pass frequency. However, these peaks will be unstable, increasing and decreasing as the flow pulsation occurs. Pressure gauges on the discharge piping will fluctuate up and down. If the pump has a discharge swing check valve, the valve arm and counter-weight will bounce back and forth indicating unstable flow.

4. Unbalance of Pump Impeller:
Pump impellers should be precision balanced at the pump original equipment manufacturer (OEM). This is particularly important since forces due to unbalance greatly affect life of the pump bearings (bearing life varies inversely with the cube of imposed dynamic load). The pump may have a center-hung or an overhung impeller. If the impeller is center-hung, force unbalance often predominates over couple unbalance. In this case, highest vibration will typically be in the radial (horizontal and vertical) direction. The highest amplitude will be at the pump operating speed (1X RPM). In this case of force unbalance, the horizontal outboard and inboard phase will be about the same (+/- 30°), as will the vertical phase. In addition, there is usually about a 90° difference in horizontal and vertical phase on each pump bearing (+/- 30°). Center-hung impellers, by their design, have balanced axial forces on the inboard and outboard bearings. Elevated axial vibration is a strong indication of pump impeller obstruction by foreign objects causing the axial vibration typically at running speed to increase. If the pump has an overhung impeller, this will usually cause high 1X RPM in both the axial and radial directions. Axial readings tend to be in-phase and steady, whereas radial phase readings might be unsteady. Overhung rotors have both force and couple unbalance, each of which will likely require correction. Thus, correction weights will most always have to be placed in 2 planes to counteract both force and couple unbalance. In such cases, it will most always be necessary to remove the pump rotor and place it on a balance machine to balance it to sufficient precision since 2 planes will not normally be accessible in the field.

5. Shaft Misalignment:
Shaft misalignment is a condition found on direct drive pumps where the centerlines of two coupled shafts are not coincident. Parallel misalignment is a condition where the shaft centerlines are parallel but offset from one another. The vibration spectrum often will show 2X higher than 1X and a 3X higher than normal with 180° out of phase across the coupling in the radial direction. Angular misalignment will show high axial 1X with some 2X and 3X and a 180° phase shift axially across the coupling.

6. Pump Bearing Problems:
Peaks (with harmonics) at nonsynchronous frequencies is a symptom of rolling element
bearing wear. Short bearing life for pumps is typically the result of poor bearing selection for the application, such as excessive loads, poor lubrication or high temperatures. If the model number and manufacturer of the bearings are known, then the specific fault frequencies for the outer race, inner race, rolling elements and cage can be determined. These fault frequencies for such bearings are found within tables of most predictive maintenance (PdM) software today.